Share This Page
Patrick Michael, a partner in Dinsmore’s Louisville office, was recently recognized with the Distinguished Service Award at the Louisville Bar Association’s Annual Bench & Bar Dinner. Michael, along with the Hon. A. C. McKay Chauvin, were recognized as outstanding members for their dedicated work and commitment to forming the Jefferson Courtroom Upgrade Project Inc. (JCUP).

Formed in 2011, JCUP is a non-profit corporation whose mission is to equip Jefferson County’s courtrooms with state-of-the art audiovisual systems. Michael, who serves as President of JCUP and Chairman of the project’s finance committee, was tasked with raising $800,000 to upgrade the 13 courtrooms in Jefferson Circuit Court’s facilities in the downtown Louisville Hall of Justice. 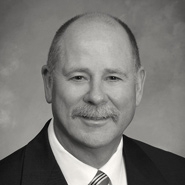