Share This Page
Thomas Trimm, a standout in the legal community with more than 30 years of experience, has joined Dinsmore’s Pittsburgh office as a partner in the Public Finance Practice Group. He previously practiced in the Pittsburgh office of Pepper Hamilton LLP.

Trimm strengthens Dinsmore’s growing public finance practice, which was recently ranked first in Pennsylvania for the number of bond issues for which the firm served as bond counsel by Thomson Reuters for the second consecutive year.

”Tom’s wide versatility as a bond attorney and his established relationships with major government issuers, both in western Pennsylvania and at the State level, will significantly enhance what is already a leading bond counsel practice within the Commonwealth,” said Brewer.

Trimm focuses his practice in the areas of public finance, project finance, real estate and land use and development. He has acted as bond counsel, issuer’s counsel or developer’s counsel in hundreds of bond financings. Trimm has represented private owners and government entities as well as developers and lenders as they raise capital and develop and operate office buildings, public works facilities and hotels, as well as public utility, manufacturing, retail, recreational and planned residential projects. He is former counsel to the Allegheny County Industrial Development Authority, the Public Parking Authority of the City of Pittsburgh and the Stadium Authority of the City of Pittsburgh. Trimm earned his J.D. from the University of Pittsburgh School of Law and his B.A. from Washington & Jefferson College. 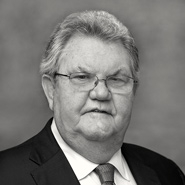