Share This Page
Dinsmore & Shohl is pleased to announce that Paul L. Reynolds has joined the Cincinnati office as Partner Of Counsel practicing in the Corporate Department.

Reynolds comes to Dinsmore from Fifth Third Bancorp where he was most recently the Executive Vice President, Chief Risk Officer and Secretary. Reynolds spent 23 years with Fifth Third and played an integral part in its expansion. He developed the legal department to align with the needs of the growing company. When Reynolds became the Executive Vice President and Chief Administrative Officer in 2009, he oversaw all the Administrative support departments in addition to Legal. Reynolds’ experience in that role included mergers and acquisition negotiation and integration, Marketing, Human Resources, facilities management, regulatory compliance, corporate governance, community affairs and global sourcing. He became in house counsel for Fifth Third after spending four years as outside counsel while practicing at Graydon, Head & Ritchey. 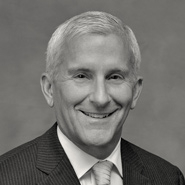