Dinsmore & Shohl’s Nick Godfrey has been elected to the firm’s partnership, effective Jan. 1, 2020. Godfrey practices out of Dinsmore’s Pittsburgh office, and he is one of 18 associates promoted to partner to begin the new decade.

“When we empower our attorneys, good things happen,” said Dinsmore Chairman and Managing Partner George Vincent. “I’m looking forward to this next generation putting their stamp on the firm. I have nothing but excitement for the future.”

Godfrey works with the firm’s litigation, tort and mass tort groups, and he maintains an active NCAA practice, defending coaches against allegations of violating NCAA bylaws. He came to Dinsmore as a legal intern during his third year at Duquesne University School of Law, and he became an associate shortly after graduation in 2011.

“Making partner is the greatest achievement of my legal career and a dream come true,” Godfrey said. “I look forward to expanding my commercial litigation practice here in Pittsburgh and my NCAA practice on a national level.”

As part of his NCAA practice, Godfrey has spoken to university classes about the particulars of NCAA infractions and their disciplinary implications. And he’s worn a similar hat mentoring young associates new to Dinsmore – a role he said he looks forward to continuing as a partner.

Outside the office, Godfrey and his wife, Ann, keep busy with their two sons. He is also an avid golfer, and he squeezes in time for hockey and soccer, too. 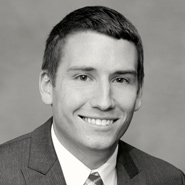