Dinsmore & Shohl LLP has welcomed associate Chase Cunningham to the firm’s Louisville office. He will practice with both the immigration and labor and employment groups.

Cunningham is a 2018 graduate of the University of Louisville Louis D. Brandeis School of Law. Before joining Dinsmore, he worked as a judicial term clerk for United States Magistrate Judge Colin H. Lindsay in the Western District of Kentucky.

“I was drawn to Dinsmore by its reputation in Louisville’s legal community,” Cunningham said. “I’m excited to enter private practice with this group of skilled and knowledgeable practitioners.”

While in law school, Cunningham gained courtroom experience as an extern with the Louisville Metro Public Defender. He also worked for several law firms, each focusing on different aspects of civil litigation.

“We’re glad Chase has joined our team,” said Louisville Labor & Employment Partner Alina Klimkina. “As a former judicial law clerk, he has valuable experience, particularly for someone at his level.”

Although he is in just his second year out of law school, Cunningham has worked toward becoming an attorney since he was young. As a college student, he tailored his studies accordingly.

“I majored in journalism because I knew it would help me develop the practical investigative and writing skills that lawyers need,” he said.

Outside the office, the Louisville native is a choral singer, golfer and coffee enthusiast. 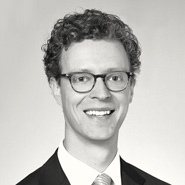