Dinsmore public finance partner John Merchant and his wife, Debra Merchant, were featured in the fall edition of the University of Kentucky Rosenberg College of Law publication Law Notes, in an article profiling their career trajectories, which began at the university in the early 1980s, an excerpt of which is below.

Now a partner at Dinsmore & Shohl in Cincinnati, John has worked in government-related roles for four decades. At the start, he knew very little about municipal finance law.

"I always wanted to be a lawyer, but I'm not sure I knew what that looked like," John said.

He studied political science and economics and talked to people like Bill James, the law school's only African American professor at the time, about what to do with his law degree. The Black Law Students Association provided John with friendships and additional insight from students from around the country.

"I looked up to Bill. We talked about the law and opportunities in the community after law school. He had a big impact on me," John said.

Around 1990, a Cincinnati law firm contacted him to join them as a public finance attorney. From 1991 to 2014, John continued developing his specializations as a municipal bond counsel with Peck, Shaffer & Williams. That firm merged with Dinsmore in 2014. John continues to practice there and feels fortunate to have built a career in public finance law.

"I enjoy it because I contribute to tangible infrastructure projects such as bridges, school buildings, the Cincinnati streetcar and the Lexington airport. I've done the bond work for these and get to see citizens using the completed projects," John said. 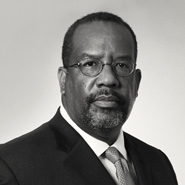