On Jan. 19, 2021, the two recent final rules issued by the Department of Health and Human Services Office of Inspector General (OIG) and the Centers for Medicare and Medicaid Services (CMS) regarding changes to the Anti-Kickback Statute (AKS) and the Physician Self-Referral Law (Stark Law) regulations (respectively the OIG Rule and the CMS Rule, collectively the Final Rules) became effective.[1] This alert is a part of the Dinsmore Health Care practice group’s ongoing summary of the Final Rules. The other alerts on this issue are located in our Stark and Anti-Kickback Hub, which can be found here.

The CMS Rule implemented changes to the Stark Law and offered several clarifying provisions related to key Stark Law terms and concepts. A summary of the changes to the commercial reasonableness definition, the volume or value standard, the other business generated standard, and the terms fair-market value, and general-market value can be found here.

In the Stark Law final rule, CMS also modified the definitions of “designated health services” and “remuneration.” Further, the CMS Rule clarified the Stark Law’s isolated transactions exception, removed the harsh period of disallowance, and added guidance on how to correct mistakes of non-compliance. These additional changes are summarized below.

CMS clarified the definition of DHS to limit the reach of the Stark Law to only inpatient services which increase the amount of payment made under Medicare. The exact language included in the CMS Rule is:

For services furnished to inpatients by a hospital, a service is not a designated health service payable, in whole or in part, by Medicare if the furnishing of the service does not increase the amount of Medicare’s payment to the hospital under any of the following prospective payment systems (PPS):

The new definition of remuneration removes the carve-out language that was in the previous definition specifying that the definition did not apply to surgical items, devices, or supplies. Under the modified definition, an item, device, or supply (including surgical items), will not be considered remuneration if it is in fact only used for one or more of the following purposes:

(i) Collecting specimens for the entity furnishing the items, devices or supplies;

(ii) Transporting specimens for the entity furnishing the items, devices or supplies;

(iii) Processing specimens for the entity furnishing the items, devices or supplies;

(iv) Storing specimens for the entity furnishing the items, devices or supplies;

(v) Ordering tests or procedures for the entity furnishing the items, devices or supplies; or

(vi) Communicating the results of tests or procedures for the entity furnishing the items, devices or supplies.

The Period of Disallowance and Correcting Non-Compliance

As such, the CMS Rule also creates a special rule allowing parties to correct discrepancies within 90 consecutive days following the expiration or termination of a compensation arrangement. The addition of the 90-day window to correct mistakes provides parties a period to resolve temporary non-compliance that occurs for reasons beyond the control of the parties. For instance, CMS provides an example where a physician is over- or underpaid due to an administrative error. If the error is detected during the course of the arranged relationship between the physician and the employer, the parties may correct the error by either collecting the overage or making up for the underpayment. The parties to any financial arrangement are expected to detect and correct errors in a timely manner. Otherwise, the actual, and not intended, financial relationship will be independently analyzed to ensure compliance with the Stark Law. CMS clarifies if parties fail to reconcile known payment discrepancies within the 90-day period, they risk establishing a second financial relationship, such as the forgiveness of debt or provision of an interest-free loan, which must satisfy the requirements of an applicable Stark Law exception.

In an attempt to reduce regulatory burden, CMS revised and clarified many of the Stark Law’s key terms and concepts. Included in the changes are new definitions of DHS and remuneration. CMS further updated the Stark Law’s isolated transaction exception, placing the emphasis on one-time transactions and service arrangements. Finally, CMS removed the impractical period of disallowance provision and established a new method of correcting non-compliance in instances where parties contract for an arrangements inconsistent with the actual compensation exchanged. Compliance with the Stark Law requires a case-by-case analysis. Please contact a member of Dinsmore’s Health Care practice group if you have any questions about these significant developments.

*Ashley Durner is a law clerk and not licensed to practice. 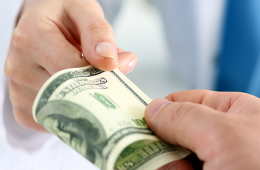