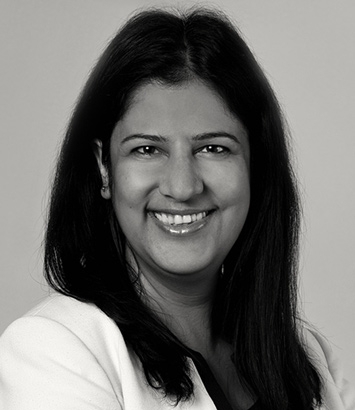 Ritu focuses her practice on patent preparation and prosecution for both domestic and foreign cases. Her background in electrical, computer, and industrial engineering enables her to flexibly work within and across multiple technical areas. She previously worked as an application engineer, building programmable logic controller (PLC) expertise integrating proprietary software and hardware across multiple industrial factory sites. She has significant experience working with intellectual property in the biomedical, mechanical, software, and electronic realms.

She has in-depth knowledge about patent eligibility issues surrounding software and electrical arts and has drafted and prosecuted numerous patent applications in these areas, being instrumental in their allowance both domestically and internationally. She is adept at working with clients to draft and prosecute patent applications, provide validity and infringement opinions, and handle freedom to operate and prior art analysis. Ritu also has experience working with clients on licensing agreements, due diligence projects, and patent litigation. She has worked with a variety of clients, such as Allstate, Toyota, Crown Equipment, C.R. Bard/Becton Dickinson, Roche, Caterpillar Trimble Control Technologies, Provenance Asset Group, Airstream, and the University of Cincinnati.

She is a frequent speaker and author about intellectual property topics.